Every man should own an old truck

Forum Supporter
2021 Supporter
2022 Supporter
#1
If you're a man, and you own property, you should own a beat up old truck. It's such a useful thing to have around, and you dont have to worry ab out scratching up some $65,000 Lariat Ranch King Boss edition whatever the hell.

I picked up this 1974 F250 Ranger XLT Camper Special (god thats a mouthful) from a buddy almost a year ago. 390, C6, D60 rear, dual tanks, all the options (AC and cruise). Definitely one of the best purchases I have made in regard to vehicles. I own a 2004 Dakota but thats a 'little' truck, and has a camper shell, so while I still used it for truck stuff, I wanted a TRUCK truck to use for truck stuff.

Tires were shot, it BADLY needed a new steering box installed (buddy included one with it), and the seat was trashed. Tossed on tires, replaced the steering gear, reconnected the rear fuel tank, and found a recovered seat locally. Thats literally all it "needed" and I've been driving it since. I've cleaned a few things up, and added a few things like the CB. I hardly ever drive the dodge anymore.

I also let my brother in law use it for his detailing business on weekends if he wants. 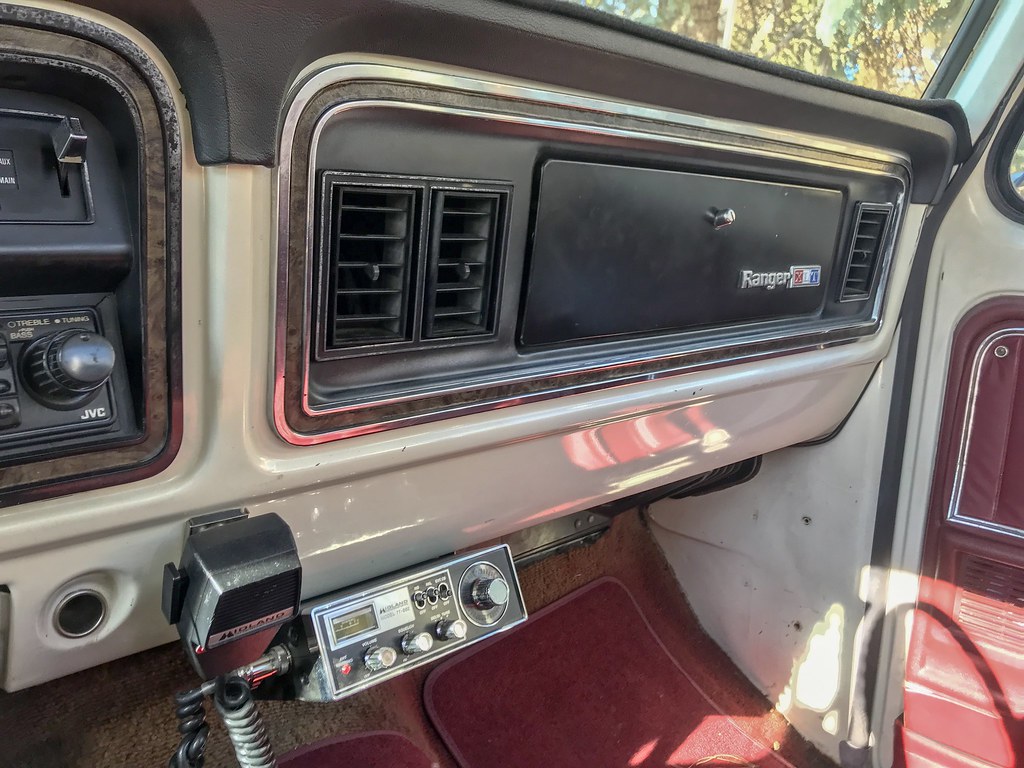 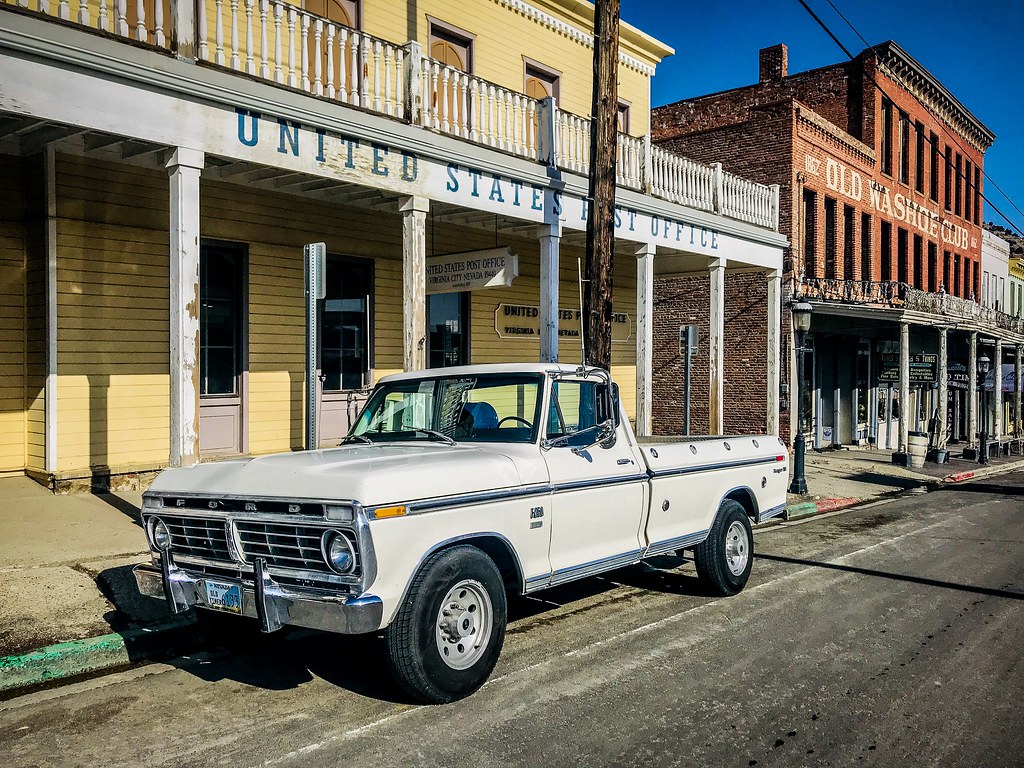 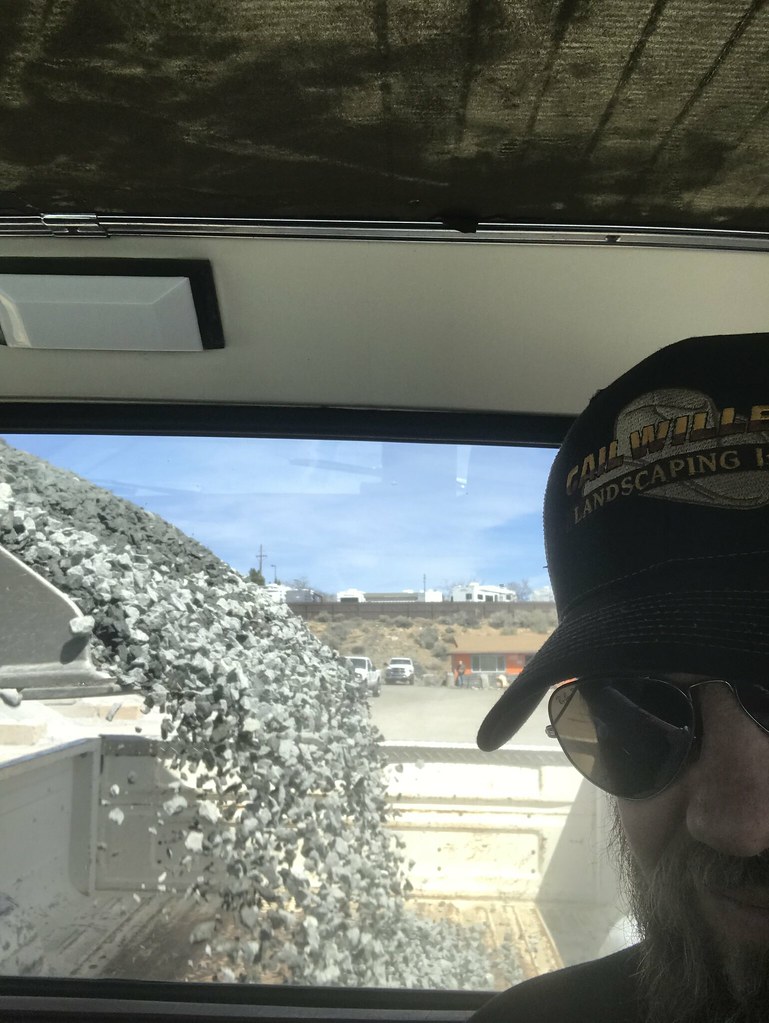 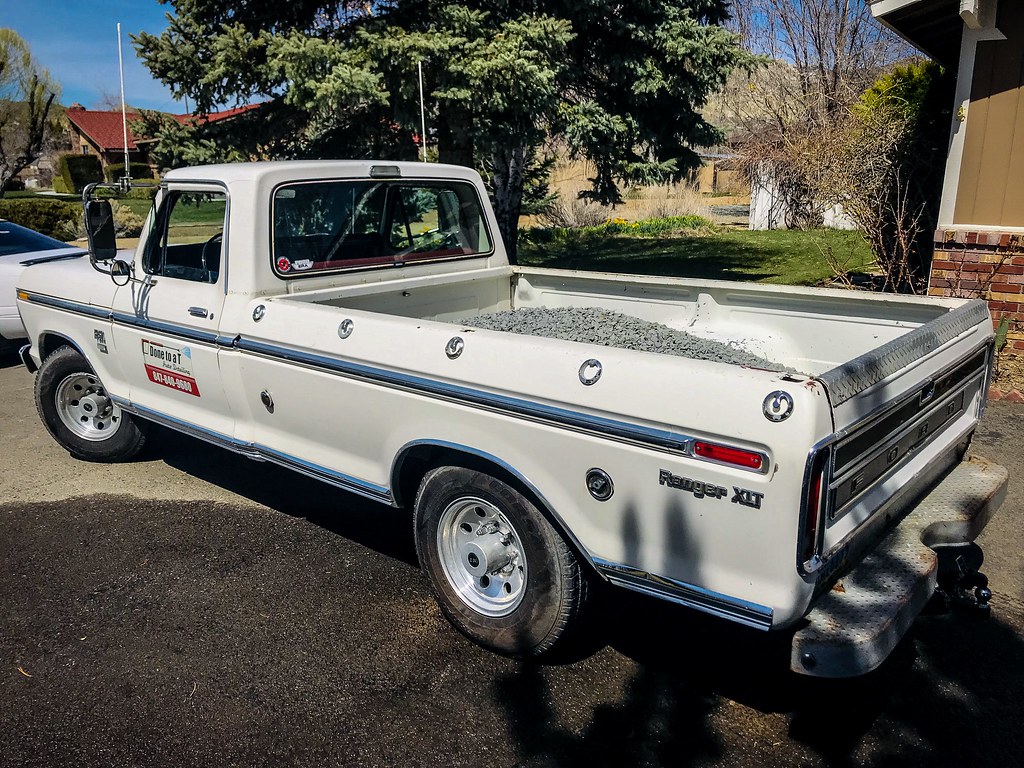 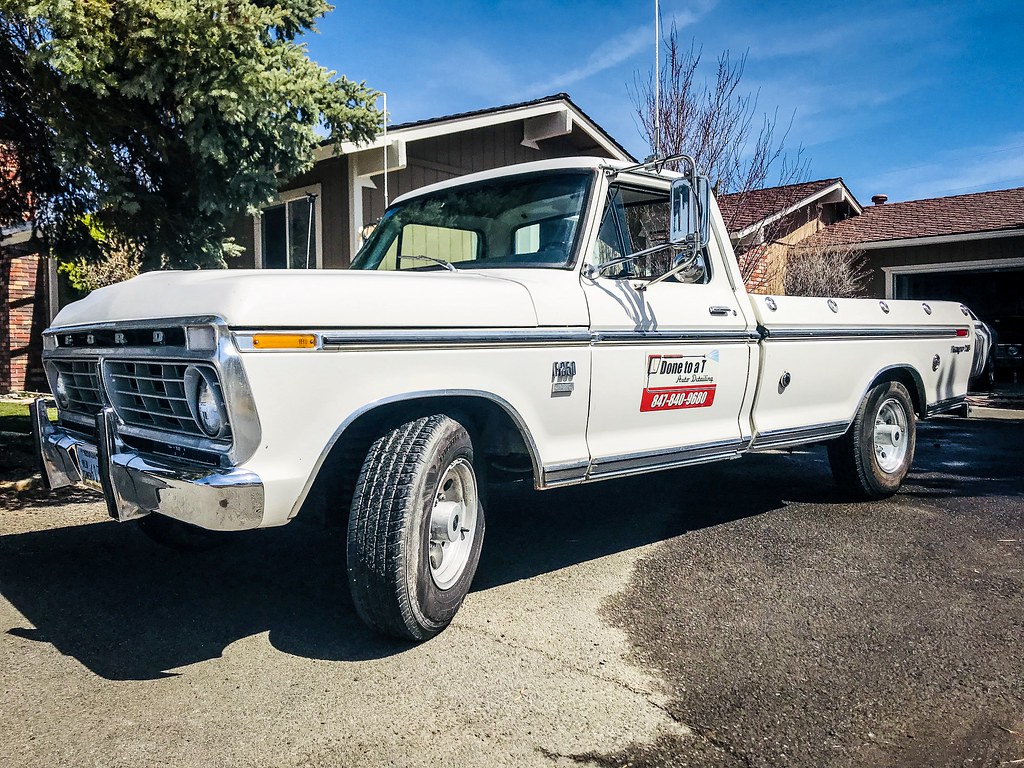 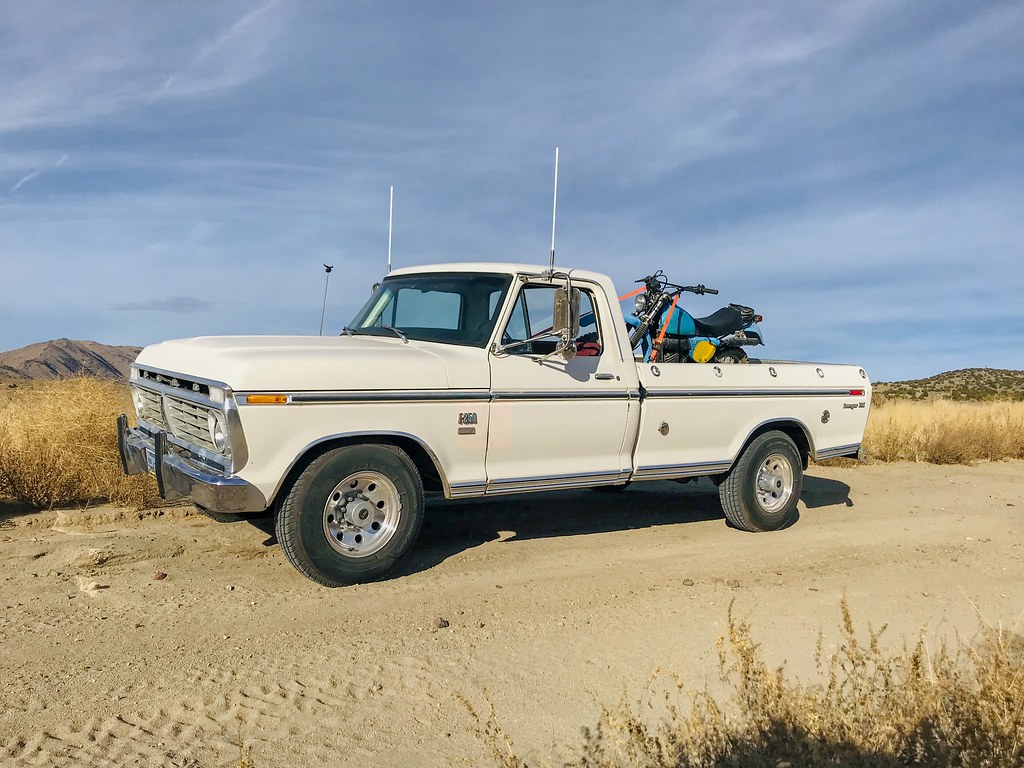 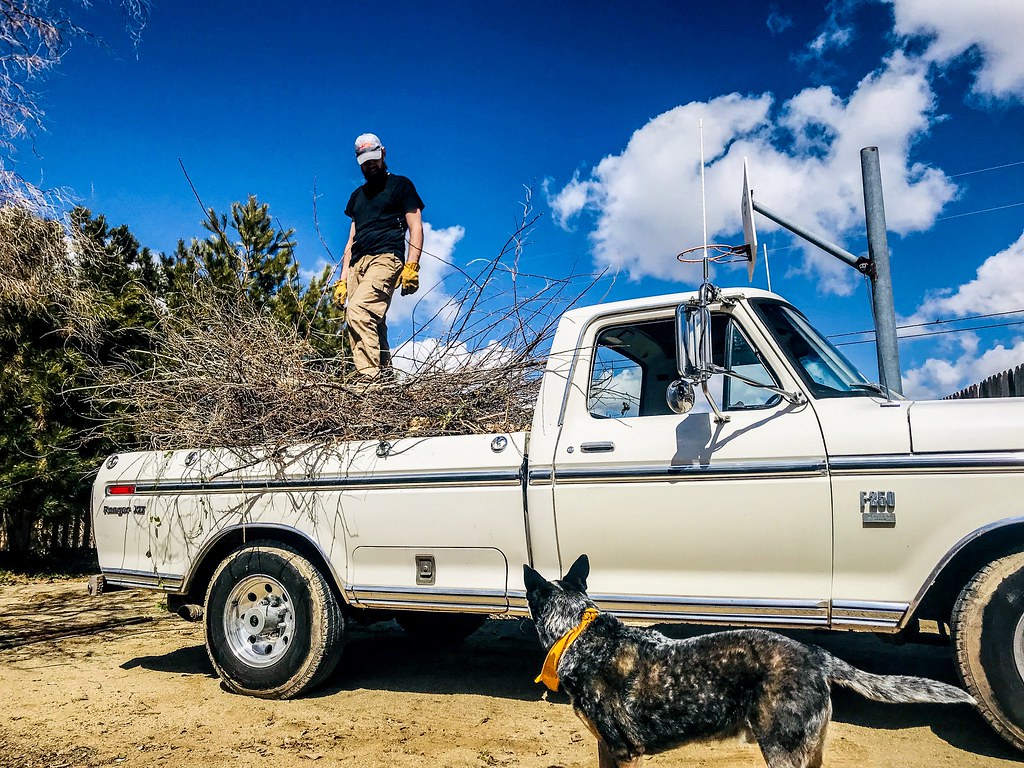 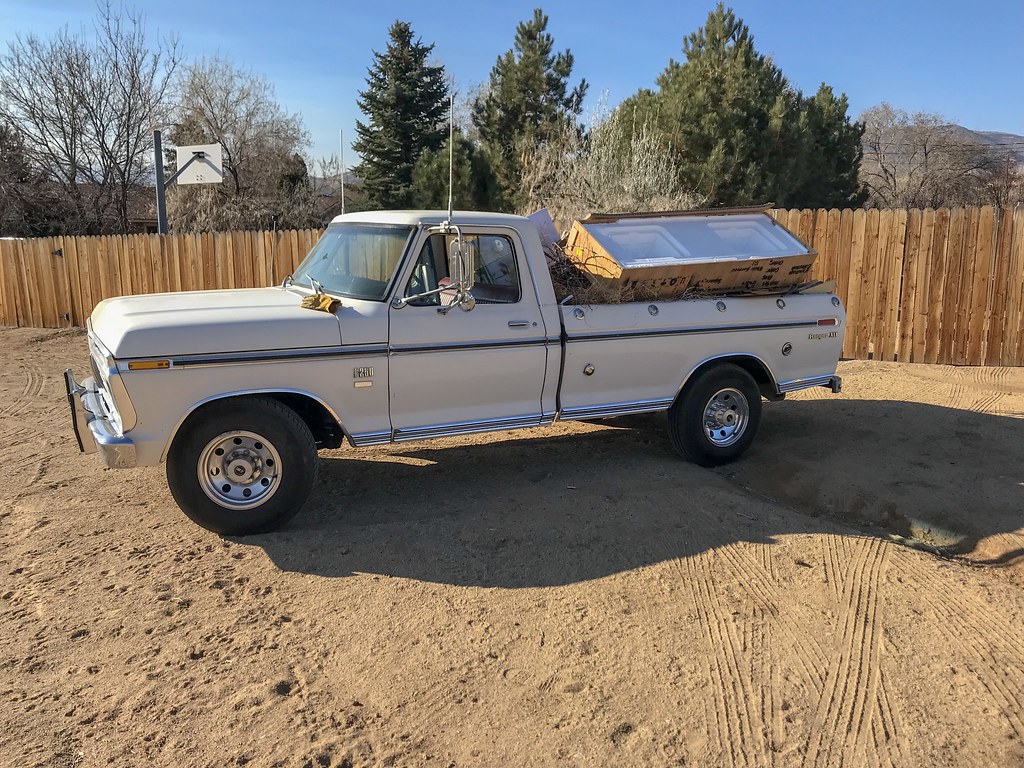 I aim to misbehave...

Staff member
Moderator
Forum Supporter
2019 Supporter
2020 Supporter
2021 Supporter
2022 Supporter
#2
Rare to find one like that so well kept. The 390 is a good part if it too, they say the 460 has enough power to pass everything except a gas station lol

Adjusting to the west!

Forum Supporter
2020 Supporter
#3
Acid flashback!!! Especially the mirrors. Dad had a ‘70, baseline with the 6. 3/tree. And those mirrors!

#4
Nice looking truck, and dog! I have an old 1985 GMC 2500 van I use for a pickup. Much sturdier than the newer 1995 Chevy G20 van I also own, but one looks nice and works, the other looks like it has been to hell and back and will probably be around longer than it's younger brother. Unless you spend a (poop)load of money they don't make trucks/vans as indestructible as they used to!

#5
It's crazy how modern "small" trucks are about the size of this thing.

Forum Supporter
2021 Supporter
2022 Supporter
#6
bigx5murf said:
It's crazy how modern "small" trucks are about the size of this thing.
Click to expand...
Maybe in length, and bulky weight, but a tacoma/colorado sure as heck is narrower and the beds are tiny by comparison. I can comfortably sit 3 people on the bench without bumping shoulders, and the bed is friggin massive.

Forum Supporter
2021 Supporter
2022 Supporter
#7
jfrey123 said:
Rare to find one like that so well kept. The 390 is a good part if it too, they say the 460 has enough power to pass everything except a gas station lol
Click to expand...
The crazy thing is my buddy had a landscape crew driving it for 2 years! It came out of that relatively unscathed. They pulled down the headliner (cardboard is still htere), and its got 2 or 3 dings, but aside from that its just got scratches and chips in the paint. Almost ZERO body damage ( just the few dings).

Brute strength and going anywhere you point it. 8 miles to the gallon with a good tail wind, unless your towing something heavy, then it goes to 14.

#14
I got to admit that is a pretty cool truck!!! wouldn't mind one myself. Time to start looking.

Forum Supporter
2021 Supporter
2022 Supporter
#15
Tophog said:
Doesn't look right without a gun rack in the back window!
Click to expand...
Lol I’ve been thinking the same thing for a long time. Needs a rack and a 30/30 hanging back there haha

#17
had just over a yard of rock in mine awhile ago. Dont drive it as much as I would like to @ 8mpg

Forum Supporter
2021 Supporter
2022 Supporter
#18
Well shoot. Drove it up to Tahoe. ran awesome but heard a tick. Got home and dove in. Rocker spacer spring broke and rocker slipped off the valve.

WILL BAN FOR AAA Batteries