And Dean D if you read this that Bushmaster FN rifle I bought from you has been a solid gun. All I had to do was move the elevation knob to 4 and it’s been dead on. Very nice rifle to carry and shoot.

#23
I've been buying Strike Industries extended latch charging handles. It's not ambi, but then again neither am I. Some of their products are made in USA, the ones that aren't are made in Taiwan. Which is at least an allied nation.

Forum Supporter
2019 Supporter
2020 Supporter
#24
I've only got 3 ARs, do I need spare charging handles in stock?? I've yet to have one give me any issues, but then, I only shoot hundreds, not thousands of rounds though my ARs....

Forum Supporter
2020 Supporter
Commercial Sponsor
#25
TexasJackKin said:
I've only got 3 ARs, do I need spare charging handles in stock?? I've yet to have one give me any issues, but then, I only shoot hundreds, not thousands of rounds though my ARs....
Click to expand...
Are these three ARs all for you, are are you outfitting a fire team? If they are all for you, then you already have your back-up spare parts for such a rare failure. 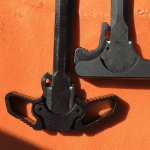 Here's my (probably Chinese) ambi charging handle, which I've since given away after repairing it.

From the photo, comparing it to a stock Springfield-Armory charging handle, one can see how the hook had bent. This caused the ambi-latch to not be able to hook onto the upper receiver.

I took needle-nose pliers and a file to bend the latch back into shape; and then to file the latch to ensure the latch would "pop-over" the upper receivers spot to prevent the latch from bending as such again.

I then ordered a Radian Raptor LT charging handle which has worked well for me. The original Springfield-Armory single-sided latch is merely kept as a spare now.

Forum Supporter
2019 Supporter
2020 Supporter
#28
So far we haven’t had any trouble in the fun guns. My main rig runs a Raptor. In the bushy 20” with BFSlll the Chinese unit keeps chugging along. I’d have not thought that would bend there but that’s a bad place and pretty much done.

Thank you for sharing.

#29
Had this happen at the range yesterday. My bcg wasn’t fully going into battery and I kept charging the rifle with no luck. Then when I took the rifle apart I seen this issue. Thank goodness it wasn’t anything else lol.
I did file a “defective claim” and got my money back though 😬. Can’t complain for the price